Does Die-Tech care about the environment and sustainability?

Of course we do! The Dennises of Die-Tech, and our employees, feel that responsibility to the environment and our greater community is an important part of our mission:

What we are working on right now:

2019:  Our Pollinator Garden adjacent to Sipe Road is fully mature!  We are amazed at the variety of butterflies and bees we host.  The plants are happy and multiplying in such abundance that we allowed several of our employees to take divisions home for their own gardens.  We continue to manage our meadows for wildlife, and have seen a Night Heron in our vernal pool. 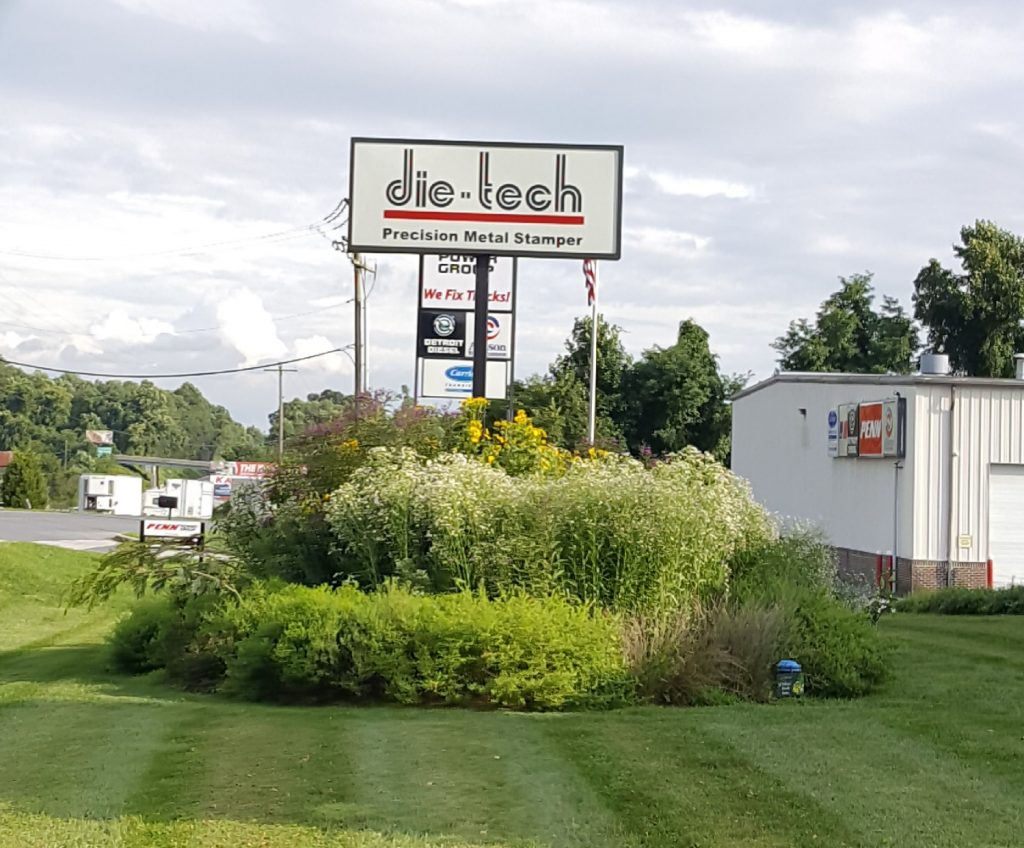 2018:  More native plants were added to our landscape – to provide food and shelter for song birds, and pollinators:  Mountain mint, Winterberry, and Goldenrod.

2016:  Our Pollinator Garden is fully installed below our sign adjacent to Sipe Road.  Our milkweeds have hosted a generation of Monarch butterflies that participated in the children’s educational display in the York Master Gardeners Butterfly booth at the York County Fair.  Once they medamorphosed into butterflies they were released to begin their migration to Mexico.

2015: We are proud to report that our efforts in sustainability have been recognized!  Die-Tech earned the 2015 MANTEC Manufacturing Award for Excellence in Sustainability during ceremonies on October 1st.  This award recognizes manufacturers that have demonstrated their commitment to competitive manufacturing, and sustainable practices.

We are installing a Pollinator Garden under our sign adjacent to Sipe Road.  This area is where one of our wells for the geothermal system was installed and we saw it as a perfect opportunity to reduce lawn, introduce more native plants to our campus, and to help pollinators that 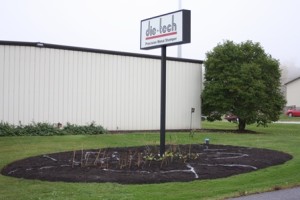 are endangered due to habitat loss.  The oval 20 x 40 foot planting will offer nectar and host plants to a broad range of pollinators, along with a puddling area for butterflies.  Some plants went in this fall, more will be planted in the spring of 2016.  We look forward to seeing it grow and bloom in the years to come, and are hoping for lots of butterflies!

2014: Our geothermal system to heat and cool the production areas goes on line.

2013:  First company in Pennsylvania to install the SP1000 electricity monitoring and control system.

Installed motion sensors in common areas and rest rooms so lights aren’t burning when no one is there.

Installed programmable thermostats throughout the building so we can turn down the heat (or turn up the air conditioning) on weekends and holidays.

2012: First U.S. stamping manufacturer to be designated a Wildlife Habitat by the National Wildlife Federation (Habitat #161,748).  (Scroll down for the details.)

All T-12 florescent tubes in our production areas were replaced with more efficient T-8 tubes and the existing light fixtures were retrofitted with electronic ballasts.  These measures reduced our electricity consumption while keeping outdated fixtures from going to a landfill.

2010: First U.S. stamping manufacturer to replace all florescent tubes in the overhead fixtures of our administrative areas with energy saving LEDs.  We also removed several interior walls and installed a new drop ceiling to facilitate a healthier work environment and to keep heat in the workspace, not up at a 20 foot ceiling!

Back in the 1980s: We installed a waste water evaporator.  This evaporator collects the oily water our operation generates, evaporates the water and collects the oil for recycling, instead of just flushing it all down a drain.

Since 1974: All of our metal waste is reclaimed, along with cardboard, paper, and most plastics.

WILDLIFE HABITAT UPDATE-2014: Two pairs of bluebirds used our nesting boxes to raise their young this spring — we are delighted!

In 2012 die-tech was certified, by the National Wildlife Federation, as a Wildlife Habitat.  Some of the first steps to achieve this honor were: reducing the amount of land mowed around the building; removing invasive species of plants, and; requesting the reduction of herbicide use within the cell tower site on the property.

An inventory of key native plants was conducted by a York County Master Gardener, and recommendations to improve our habitat for native birds and insects were made, including:

All this has been completed. 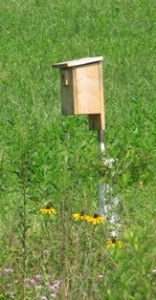 Six bluebird boxes have been added to the outlying landscape, we are hoping we will attract 2-3 nesting pairs of bluebirds, and perhaps wrens or swallows.  Three bee nesting boxes have been installed at points closer to the building and our gazebo so that we will be able to observe their use by native bees.

Surely everyone can understand the excitement of seeing those flashes of brilliant blue as the bluebirds drop to the ground in search of grasshoppers to feed their young — but, what may be a little more difficult to understand is why we would provide nesting boxes for bees.

Bees are the most important pollinators of fruits, vegetables, and flowers in the United States. One out of every four mouthfuls of food that we eat was created due to the efforts of a bee. And all bees throughout the world are endangered due to habitat loss and use of pesticides. Some of the things we wouldn’t have to eat if bees disappear from the landscape?  Most fruits (apples, cherries, grapes) and berries (blueberries, strawberries, raspberries) along with some vegetables like tomatoes, squash, pumpkins, eggplants, and peppers would either disappear or be so highly priced due to hand pollinating requirements that most of us would not be able to afford to eat them.  Coffee and chocolate would also be removed from our lives!

young.One can tell that a variety of native bees are using the nests when different types of “plugs” appearing in the tubes of the nesting box.  Some of these tiny bees use mud, some use grass or bits of green leaves, and still others use wood shavings that they remove from the inside of the tubes.

Do native bees sting? Native bees are unlikely to sting, in fact native male bees have no stinger at all. And the females are so busy getting ready to produce the next generation that unless one grabs and squeezes these bees you won’t get stung.

At the northwest corner of the building a rain barrel has been installed. This barrel will capture rain from the roof to be used to maintain the birdbath that can be observed from the library windows.  The rainbarrel outflow will also help move excess water away from our building’s foundation. die-tech has always had Killdeer (a type of bird) nesting on our property during the summer –they discovered, and started using, the birdbath within hours of its installation!

We have vultures, both Turkey and Black, that use our cell tower as a roost .  It is especially exciting during the fall migratory season when we have counted as many as 60 big black birds ‘kettling’ in the sky over our parking lot getting ready to spend the night in the tall trees at the edge of our property.

Should you visit die-tech, we hope you will take a moment to observe, and enjoy, how nature is responding to our efforts as we become better stewards of the land.

Request a Quote
About Us
Certification
Services
Case studies
Sitemap